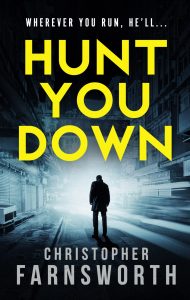 I have to confess that thrillers are not my usual choice of reading matter but when I was sent a copy of Hunt You Down I began to realise what I’d been missing.

I was hooked into the curious world of John Smith from the first page to the last. Hunt You Down is a real page turner, but Farnsworth handles the pace so well that you get enough time to catch your breath before riding the next wave of jeopardy.

The protagonist, John Smith is no ordinary gun for hire. He’s a former CIA man with  an extraordinary skill – the ability to read minds.

When reality TV star, Kira Sadeghi is gunned down at her own wedding, her wealthy father hires John Smith to track down the attackers. Smith comes across ‘Downvote,’ an encrypted site on the dark net with a list of celebrity names as targets.  But discovering the creator of Downvote is not so simple – even for someone of Smith’s specialised skills.

The premise of Hunt You Down really had me thinking about how little we are away from something like this actually happening. People can be spiteful and cruel when they are able to hide behind social media but given the chance, how many would take things further?

The plot was tightly woven and amid the thrills and action gives the reader something deeply worrying to think about. Happily, Christopher Farnsworth has put my mind at rest by contributing an article for today’s blog.

The World is Getting Better, Believe it or Not

A couple of years ago, a preacher paid for a bunch of billboards that gave a firm date for the end of the world. And then the day came and went. The billboards were still there. So was the rest of the world.

Today, however, most of the people I know check their phones every few minutes in case the President of the United States has decided to declare war on North Korea. Or to see if there’s been another mass shooting. Or to find out if a natural disaster has decimated another city.

These days, the end of the world doesn’t look quite as distant as it used to, even to people who aren’t crazy.

And for someone like myself, who spends his life imagining the worst-case scenario for everything, the news can be enough to start me researching the price of a condo in a luxury doomsday bunker.

But here’s the thing: the world is not ending. We’ve been waiting on the Apocalypse and the Final Days and the End of All Things almost since the beginning of civilization, and we’re still here. I don’t really say this very much in my novels, but the world is actually getting better all the time.

I know, it’s hard to see it. But these are the reminders that keep me sane when I start to fear that the zombies are on the march.

1. The world is getting less violent.

As Steven Pinker has pointed out repeatedly, our species is less violent than it’s ever been before. Crime is down overall in the developed world. And despite high profile horrors like the Las Vegas shooting, we are safer than we have been in our history. That doesn’t mean we’re perfect yet — one nuclear bomb can just ruin your whole day, as the saying goes — but we are not killing each other in the massive, stupid numbers that we once did.

2. Global poverty is on the decline.

Millions of people are being ratcheted out of extreme poverty than ever before — about 137,000 a day every day for the past 25 years, according to Oxford researcher Matt Roser. And life continues to improve for millions more. We still have a long way to go, but living standards are getting better, with fewer people suffering the kind of bone-grinding deprivation that used to be standard all over the world. That is something to celebrate.

3. Renewable energy is on the rise.

By now I thought we’d have flying cars and atomic fusion. It’s admittedly disappointing that most of the world still gets its energy from burning coal in the 21st Century. But things are looking up. Energy from renewable resources is on the rise all over the world, mainly due to the adoption of solar power. Germany now generates 35 percent of its electricity from renewable sources. The UK is at 30 percent, and the United States is at ten percent. This means lower carbon emissions, which in turn means a better chance of heading off global warming.

4. The infant mortality rate is at the lowest point in our history.

Once upon a time, the death of children was so commonplace that people planned their families around it. Children’s books were primers on death so that they’d be prepared for it. The great spiritualist boom in seances was at least partially driven by parents who wanted to talk to the ghosts of their departed sons and daughters. And to be honest, today we have kicked the shit out of death. Infant mortality has dropped more than 90 percent in the past 100 years. Even the United States, which lags behind other industrialized nations, has seen improvement in the past few years. The death of any child is still one too many. But thanks to vaccines and public sanitation and advances in health care, it is much rarer now than ever before in human history.

5. People are getting smarter.

Yeah, I know. This one is the big ask. It’s easy to believe that the world is getting stupider, especially if you’ve just spent some time navigating heavy traffic or watching the news. But it’s not true. Nine out of ten children in the world receive some form of schooling today, almost twice the number in the 1970s. Literacy is at all-time high. And more girls are receiving education than ever. Literacy is the first step to joining the human conversation. It’s the first step to making the world even better.

There is still a long way to go, in all of these areas. But it’s important to remember how far we’ve come. We did all of this. All of humanity, working together. In fits and starts, sure, with some horrible detours along the way. But we’re getting there.

The future is coming at us, one day at a time, like it or not. But we can handle it. We always have. 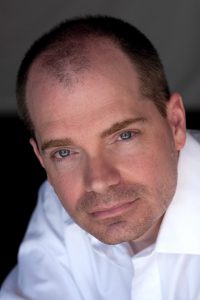 Christopher Farnsworth is the author of six novels, including HUNT YOU DOWN, available from Bonnier Zaffre.