Home › Books › Love on the Waterways by Milly Adams 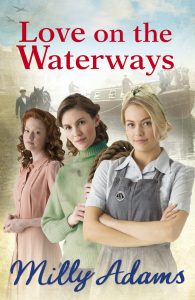 March 1944, West London
It’s been five months since Verity Clement fled home for a life on Britain’s canals and she could never have imagined how tough it would get. Yet hauling cargo between London and Birmingham is far easier to face than the turbulence she’s left behind.

When Verity’s sweetheart returns unexpectedly from the front line, she dares to dream of a brighter future. But life aboard the Marigold is never smooth sailing. New recruit Sylvia is struggling with demons from her past while crewmate Polly must carry on in the wake of devastating news. Verity does her best to help, but a shocking discovery is about to turn her own life upside-down.

As the realities of war begin to take their toll, the waterway girls will have to pull together if they are to survive the uncertain times ahead…”

I love The Waterway Girls. I am absolutely fascinated by the way that young women from differing backgrounds came to live and work on the waterways of Britain as their contribution to the war effort. There was not one little thing that was glamorous about it, no smart uniform, no chance of staying the slightest bit clean and groomed; they were usually too dirty and grimy to attend parties and dances that those living on the land could escape to. Conditions were  spartan, the work filthy and physically demanding, yet Milly Adams makes you want to hop on and join the girls on their slow  journey from London to Birmingham, and all places in between.

Sometimes when they’d run out of things to wear, they’d wash their clothes in their boiler on the bank, but although cleanliness might be next to godliness in the real world, it was not on the canal, or not for these particular ‘Idle Women’, as they were called – with fingers pointing to their Inland Waterway badges. Things weren’t helped by the absence of a bathroom on the boats, with just a bucket for the necessities, unless they used the pub’s toilets. Her parents would faint;

The book is prefaced with a map of the London to Birmingham Grand Union Canal which was useful, and a glossary of boating terms which landlubbers can refer to. It wasn’t needed however, as Milly Adams gently weaves the information throughout the story so that the reader knows what’s what.

New characters are introduced and through them we learn again the ways of the Boaters, whose way of life is fast diminishing.

Verity pointed above them to the arched bricks, worn where the boaters would lie on the cabin roofs and walk their boats through, while the runabout took the horse over the top. Tom murmured. “I never realised how hard any of it was. And I mean any of it.”

Neither had I, and it made me wonder how many young people would want to sign up for that sort of life and also endure it – but in wartime, they did. However, the work may be hard but the girls are plucky and strong, and as the story progresses they form a unique bond that lifts them through the dark realities of war and keeps them positive.  The characters have such depth and warmth which allows the reader to emphasise with their problems and tribulations, and as we read on, to understand why they behave the way they do.

The events of book 1 (The Waterway Girls) are woven seamlessly into this book so that the reader isn’t left wondering what has happened before –  but why deny yourself the pleasure of falling into the world of Polly, Verity and Sylvia.

I tried to ration reading the last few pages, but hopefully there’ll be another Waterway Girls passing by real soon.

Love on the Waterways is published by Arrow at £5.99 RRP and available in all good bookshops, supermarkets and Amazon.

For more about Love on the Waterways follow the blog tour. Next stop  Mixing Reality With Fiction