Home › Family › Box Sets and Little House on the Prairie

It was something to look forward to every week and we would be desperate for Laura and her family to overcome their problems.  We hated Nellie Olsen and her pushy mother and hoped they would both get their comeuppance by the end of the episode.

Most weeks we would all be crying, mum and dad included, at wholesome family entertainment – stories about people pulling together and overcoming difficulties, perhaps helping someone they didn’t like but who nevertheless, needed their help. I used to love the Waltons too. They didn’t have much money either but they had each other and were able to support family and friends through the tough times. And Grandma and Grandpa were included too, and were very much part of the story. They weren’t pushed to one side as useless. Grandpa still worked in the saw mill and Grandma was always in the kitchen helping Liv, or doing some mending. They were there to support the family they had created, give the younger members the benefit of their life experience –  sometimes they were right, sometimes they were wrong but they all stuck at it and worked it out somehow.

I wouldn’t have wanted to watch either of these series as a boxed set. I wanted the feeling of looking forward to something and I also wanted to digest what I had watched – or learned – from the story. We talked about it afterwards, we didn’t click a button to go straight to the next episode. On demand is great if you want to catch up with something because you are out living your life to the full, it’s great if you work shifts or are ill but really, there’s nothing nicer than settling down on the sofa with your family to watch something you all enjoy, something uplifting and kind.

Anticipation is part of the enjoyment – not being able to have everything you want straight away is a good thing. It makes you stop and think whether you really want it or not. Saving for something makes you treasure it more, it was hard won, you had to give up something to trade for something else. 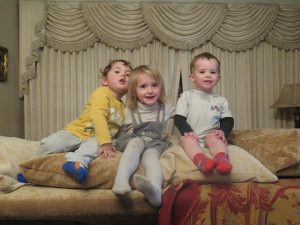 We live in a society where instances of child anxiety and mental health problems are higher than they have ever been and yet on the surface so many of them have so much – and yet so little. Let’s all slow down a little with the younger members of our families and friends. There’s nothing nicer that snuggling up to watch something together and talk about it afterwards. It helps us connect. Something that is troubling them may have been highlighted in the film/episode and will open an avenue for them to talk about their worries and fears.

But remember – only one episode.