It used to be the programmes  we looked forward to didn’t it. Delighted to get the Radio and TV Times buper editions to find out what was on over the Christmas period. We would then work out what clashed and make a choice – remember that, no catch-up and on demand in the dark old days. The excitement to find out what the big Christmas Day film was, Disney time, Morecambe and Wise, The Great Escape and Von Ryan’s Express. Would Frank Sinatra manage to jump on the train this year so we could have a happy ending?

But more and more it seems the adverts are the talk of Christmas. The mini-films that fill the two-minute spaces between programmes, a few seconds to persuade you to spend your cash with their supermarket or department store as opposed to their competitors.

My favourite was the John Lewis advert from two or three years ago. It was a cartoon #bearandhare. Bear went off to hibernate for the winter and Hare bought the perfect gift – an alarm clock so that he wouldn’t miss Christmas Day. Lily Allen singing The Simple Things was the tune that accompanied the cartoon. Its message wasn’t about overindulgence it was about buying the perfect gift – as if there is any such thing as perfect.

That same year my daughter was getting stressed; money was tight, and she became very upset by a few comments from people asking what she’d got her 18-month-old daughter for Christmas – and when she told them, being asked ‘Is that all?’

Is that all? Is Christmas all about excess, of food, of debt, or presents? Or is it really about the little things?

I asked Nelly what was the earliest Christmas present she could remember receiving – everything was a blur until she was about 5 or 6 and then it was dolls, Lego, Sylvanian Families. Would Elsie remember the presents or the time she spent surrounded by people that love her?

In the recession of the 90s we lost everything and returned to live with my parents for a while. My son, Nick desperately wanted a Teenage Turtle and I remember getting a tip-off that a delivery was due in Woolworths that day. I got myself down there and loitered around like a female Arthur Daley.  I’ll never forget the scrum that ensued but I got my Leonardo and Donatello…and vowed I would never do it again. EVER. If I couldn’t get the present I couldn’t get it. Santa was sold out! One of the little things that makes me shudder.

And it’s not the big presents that get remembered either. My daughter set her heart on a Jibber Jabber. On Christmas morning she came down to a mountain of presents, opened them all, and was disappointed that the Jibber Jabber wasn’t there. Her face was a picture when we directed her behind the sofa… and this is what she found. 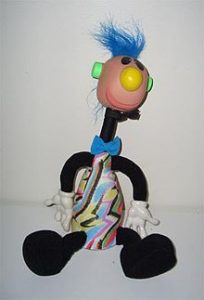 When I think of the Christmases that were memorable it’s of time with family and friends, dad falling asleep after dinner, Morecambe and Wise, turkey soup made with stock from the bones – and grandma’s trifle.

My kids will often talk about THE Christmas. My in-laws had come to stay along with my adult step-son, Ant. Two friends were joining us, Debbie and Pete. Debbie was a nurse and working the day shift so we had dinner later than usual. Husband and son spent the afternoon watching old films and drinking brandy. By the time dinner was on the table husband was merry, shall we say, very merry.  As we all sat down to eat my children were horrified to see their dad start eating before everyone was served. We carried on regardless, dad admonished, and all was going well until we smelt burning – and discovered that it was Pete’s hair, set on fire by the candle artistically placed on the sideboard behind him.

Dad managed to keep awake until the pudding but then was gently led to the sofa while we finished the meal. He awoke hours later to find that everyone had gone either home or to bed and was absolutely devastated. And that’s the Christmas that makes my children laugh so much. Happy times. And what presents did they get? None of us can remember. Although perhaps my son got a pair of folding binoculars – again, as my husband forgets he has bought them and every year thinks they are a good idea.

And these are the things that make Christmas, not the big extravagant gestures but the small things that seem mostly insignificant at the time.

I wonder what present you’ll remember this Christmas – or will it be the simple things?