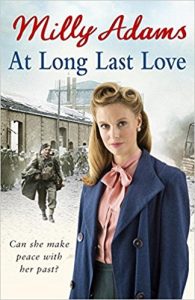 It’s July 1942, and twenty-three year old nightclub singer Kate Watson has made a home for herself in bombed-blitzed London. A motley crew of friends has replaced the family she’s not spoken to in years. That is until the evening Kate’s sister Sarah walks back into her life.

Sarah has a favour to ask: she needs Kate to return home to the west country for one month to look after her daughter, Lizzie. Reluctantly Kate agrees, even though it means facing the troubled past she hoped she’d escaped.

Kate is confronted once again by the prejudice and scrutiny of the townsfolk, including the new village vicar. As the war continues, Kate must fight her own battles and find not only the courage to forge a future but perhaps, at long last, love.

I’ve just finished reading At Long last Love. Another great read set in London and a village close to Yeovil? How well do you know those locations?

I lived in Dorset and Somerset for many years and the book is set reasonably near Yeovil, Somerset, which is where I was Writer in Residence and still go for their great Literary Festival most years, doing some talk or other. Last year I was on stage ‘In Conversation’ with General Sir Richard Sheriff discussing his book War with Russia. I quite forgot, so heady was it to have  the microphone in my hand, and asked, ‘Should I call you Richard?’

I do get over excited on these occasions. One day it will bring about my downfall. A friend I was staying with said, as I left that morning. ‘Remember you are not the star.’ It falls on deaf ears, dear reader. I am a lost cause.

London? Well, I live much nearer now to London now and love it, but that’s partly because you never quite know it, there are so many places to explore. I certainly don’t know either in the 1940s but of course when living in an area for any length of time you start hearing stories of way back when so you feel as though you do.

I very much enjoyed your previous book, Sisters at War. What inspired this particular story of two sisters, Kate and Sarah, in At Long Last Love?

Thank you for enjoying my books. I haven’t written about the SOE before but as a child met Lucy, who had been an agent in France, was captured, tortured (her fingernails never quite regrew, though they can). I found it such a courageous thing to do, because one is so alone – who can you trust, who not? Does it leave you paranoid? Surely it must? I also knew that some of the women agents had children and could quite get my head around leaving a child knowing you might well never return. It was something that I felt like exploring, but also honouring.

So, there also needed to be a strong part of the novel which illustrated what people were fighting for – their nationhood and families. But also the private battles that people fight even when the world is fighting a larger enemy. Hence Kate. I loved her story actually,  her sacrifices when she would have been justified – it transpired – in telling Sarah: no.  The vicar was lovely too. I did rather have James Norton in mind, the vicar in Grantchester.

Which sister do you most identify with?

An author’s job is to identify completely with all her characters, nice, nasty, whatever or it doesn’t work so that’s what you do and I came to like Sarah, or at the very least, admire her. I didn’t to begin with. Kate I always liked because she was so brave on a much smaller stage, and she made me laugh, and cry.

I often wonder who of us would step up to the mark if war was ever declared in this country. Testing times make us do things which we never dreamed we were capable of. Both Kate and Sarah were brave in different ways but I do so admire the bravery of those who were in the SOE. Did you get to interview any of these incredible women as part of your research?

I have known men and women who were in it, their behaviour, their quietness, because of course they never talked about it. But then, again of course, they came to do so and trust is something that suffers. So yes I have talked to them, but in dribs and drabs and over years, knowing that one day I would write about it, but not anyone’s actual story. How could I? It’s not my right. So it’s always a composite character with an essence of what I want to convey .

How much research do you find you need to do before you start writing?

Less than I did because I find I have an understanding of 20th century history having written about it so much but there’s still a fair bit to do, to get it right, though I’m sure it still has errors. It’s strange really because if I wrote let’s say using accurate speech patterns and words it would sound ridiculously stilted so you have to adapt.

Milly, knowing you as I do I think you must have researched the London club scene in great depth. Have you recovered?

Oh crikey, just about, but have the tables I danced on?

What next for Milly Adams?

I’m writing a series about The Waterway Girls, the girls who trained to carry cargo on narrowboats in the war. It’s a deeply traditional hard, hard, life, with its own culture, and here were these robust young women bursting onto the scene doing a job which normally took generations to learn, living in stark unbelievably cramped conditions, with another two women they have to get on with, trying to earn their place. It’s their lives, loves and losses. Not to mention their experiences with the dreaded bucket.

The first one is out on September 7th: The Waterway Girls. 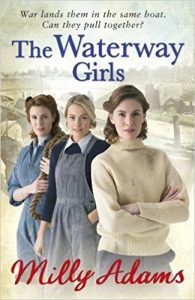