Home › Family › Look closely. What do you see? 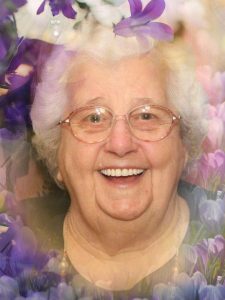 Are you looking closely?

So, what do you see?

All old lady? A smiling woman? A vibrant girl? A woman full of hopes and dreams?

I’ll put money on it that the first thing you saw was an old lady. Am I right?

That’s the trouble when you take people at face value, when you judge by first impression.

All the old people you see have lived full lives, full of joys, sorrows, hardship and laughter. We are all the same. No one lives a charmed life. No one escapes the sad days, the downright drab days and no one’s life is without one little scrap of joy and laughter.

The woman in the photo is Eva Skudder, my sister’s mother-in-law. She passed away recently and we all met to celebrate her life. She was quite a woman. When she left school she worked at Cosalt in Grimsby braiding nets, mainly for use on the trawlers that sailed from what was then the largest fishing port in the world. I would think it was quite a sociable job which would have suited Eva perfectly. She was a sociable woman and enjoyed being among people, talking, laughing, sharing stories.

Time is fleeting and we don’t always stop and listen to the tales the older generation want to share. And yet if we don’t we lose the deeper meaning of things that a picture can’t portray. I can get a grasp of the work environment from a photo but I don’t get a sense of those women’s lives, their conversation, their feelings.

Eva married Tom and went on to have six children with him – all boys! What a handful that must have been. Tom went away to fight in the Korean conflict and left her to get on with it. She had one son and then along came twins. When they were playing up she can remember one child running left and the other running right. She’d catch hold of one, put him under her arm and chase after the other. Six boys is not a life for cissies.

I still don’t know much of Eva’s life but I know that she had an indomitable spirit. Her family was immensely important to her and she was so proud of her boys. Her story isn’t lost because it lives on in her children and her grandchildren.  Her spirit, her joy and her laughter will stay with them always. She has left quite a legacy.

You don’t have to be a celebrity to have a story worth recording. Life moves along so fast, so many things change in the blink of an eye. Capture those stories in photos, in notes, in videos, in recordings. And don’t look at old people and think they have always been old. Once they were just like you.