Home › Theatres › The Palace Theatre, Grimsby – Behind the Scenes 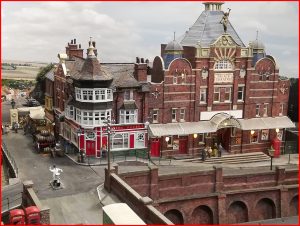 This is the most wonderful model of the Palace Theatre in Grimsby made by the talented Geoff Byman. It forms part of his O Gauge Garden Railway which is based on buildings in the area. The theatre was created from a 110 year-old faded photograph – no drawings were used to scale it, just his artistic eye. Very clever.

The theatre would still have been in existence when I was a child but the canopy had been removed and the building was being used as a warehouse, so perhaps it never caught my eye.  Such a shame but  at least the Palace Buffet on the corner still remains. The Palace Theatre features in Christmas with the Variety Girls which is published on 15th October.

The Ghosts of Buildings

This is all that remains on the site – two tiled panels and an information plaque. The ghosts of the theatre are still there though – as are the memories. 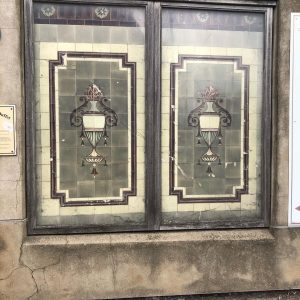 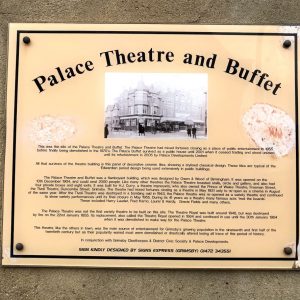 There were many theatres and cinemas in Grimsby before WW2 – plenty of places to go to see the stars of stage and screen. Some of them still exist, although not recognisable for the purpose for which they were once built. The Savoy in Grimsby is currently a McDonalds.

Tiddly at the Tivoli

My grandmother would go to the Tivoli in Duncombe Street to see the shows and we still have a couple of programmes from that time. Here’s the cover from one of them. I love the dancing girls and the trawlers, the dock tower. No mistaking where it’s meant to be. The Tivoli was damaged by bombs in 1943 and never reopened. 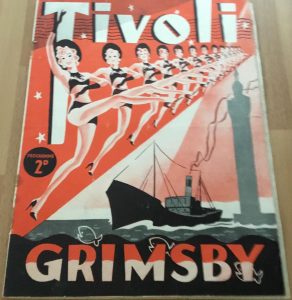 So many of our beautiful theatres have been replaced by car parks and other buildings. It’s sad but I totally understand why. First came the movies, then TV. Why would people go out in the wind and rain to be entertained when they could cuddle up on the sofa instead – and it was cheaper. And then came computers and social media. Now we sit watching things on our phones and tablets – anytime, anywhere. But it’s not the same, is it? Nothing beats live entertainment. That wonderful feeling when you’re waiting in the for the lights to go down and the music to play.

Over the past few weeks I’ve been asking people for their memories of the Palace Theatre in Grimsby and the Empire Theatre in Cleethorpes and so many of them offered fabulous insights into a time long past.

One of them was Jean Lane. She told me: ‘My grandad, Harry Atkin was stage manager there in the twenties and thirties and my dad, also named Harry helped out when he was a lad. My great-grandad performed in music halls. His act was to invite the audience to bring along any instrument they liked. He would then choose various instruments to play tunes of the time. ‘

Her father wrote some of his memories down and I quote them here.

‘… my father would wash, shave then prepare himself for the theatre. He would wear a spotless white shirt, smart dickie bow tie, polished boots, a nice suit, bowler hat, velvet collar top coat, silver walking stick and then off to work at the theatre. My mother worked in the dressing rooms at the Palace most nights, preparing the artistes for their shows.

After Christmas 1930, my dad took me to the Palace. I was told to climb up some steel ladders to the top of the theatre and wind the scenery up from last night’s show. I was only 10 years old. The catwalk looked really high up so it was explained to me that if I stopped and lost my way, I was to walk back down onto my dad’s head.

Along with my step-brother I was given the job of catching rats round the back of the theatre. As far as I know loads were caught every night.

My dad, step-brother and mother got the job of wiring the theatre for electric lighting. It was done and completed very quickly.’

I love the description of how Harry’s father got ready for work – how smart he must have looked. A different time wasn’t it?

I’ll be sharing more stories and memories each Tuesday over the next few weeks so pop across and join me.

And if you have a memory to share you can use the contact form, email me at tracy@tracybaines.co.uk or pop over to my facebook page @tracybainesauthor

I’d love to hear your stories.

If you’d like to keep up to date with news of my books, events and giveaways you can sign up for my monthly newsletter here.