Home › Theatres › The Palace Theatre, Grimsby – Up in the Gods

Theatres are closed  as they were in 1939 when war was declared.  Many of them soon reopened – although not all – and many were lost to bombing raids. The Tivoli Theatre in Grimsby was one such victim.

When a theatre closes a natural thought would be for the entertainers that are out of work but many others contribute to keep a theatre running and they have lost their jobs too.  I’ve written of Jack Webster and Harry Atkins, stage managers  at the Empire and Palace Theatres respectively, and now I’ll move around the theatre a little more.

Kevin Atkin’s father was the caretaker there in the 20s and early 30s and Archie Ayre’s father, Arthur worked there as a stage-hand in the 1930s. I like to think they all knew each other and worked together on the productions.

And then there’s all the front of house staff. Sylvia Cousins’s  sister-in-law, Joan was a cashier in the kiosk at the Palace. I wonder if that was a boring job if you weren’t very busy and a very sociable sort of job when you were. Did they have time to talk to people as they queued twice nightly for their tickets?

Chris Roman’s  mother and her friend were usherettes at the Palace when it was a cinema during WW2.

It was always full and popular with Americans. The girls were also fire watchers in the air raids. The dressing rooms were not in use of course and the place being next to Spillers it was full of rats and mice.’ (Spillers was the flour mill – glamorous, eh?)

Little snippets like this are so valuable to me. In Christmas with the Variety Girls it’s 1939 and the Palace has a live show, and is not a cinema. Many theatres went in for something called Cine-Variety whereby a film would be followed by entertainers – or vice versa. I can take small liberties with the  facts and allow for what might have happened. Everything has to be plausible.

Sharon Houghton’s nana and Sonya Coulbeck’s nana, Madge Ball worked there as  usherettes.  Madge met Laurel and Hardy and got a whole host of autographs from other entertainers who appeared there there over the years.

In later years Frances Bovill worked as an usherette in 1953/4. Her grandmother took in artists from the Palace so Frances met many of them.

Getting work in the theatre was a family affair just like any other business. If you worked somewhere you could put in a good word for family and friends. And who wouldn’t want to work in a theatre, especially as an usherette? You’d get to see many of the great entertainers and get paid for it too. I thought of all these women, taking tickets, selling programmes and showing people to their seats, closing the curtains across the doors to keep the light out.  Yet it was David Wrightam’s memory which made me smile.

One of my first memories of being a toddler, was been taken up to ‘the gods’ and told not to move by my mother. She was an usherette. I saw Laurel and Hardy in a show in the early 50’s. I was usually asleep when my mother came to get me after working.’

It brought back  many memories of taking my own son to the theatre, asleep in his carry cot. He wasn’t quite born in a trunk but so many children would have slept in dressings rooms in theatre around the country over the years.

Up in the Gods

It was David’s phrase ‘up in the gods’ that took me right up there with him, hidden away in the darkness. The photograph below is of the seating in the gods at the King’s Theatre in Southsea. A beautifully preserved Frank Matcham Theatre. The seats are one long leather cushion. I can only imagine how tightly people were packed up there in times gone by – and it can’t have been that comfortable. 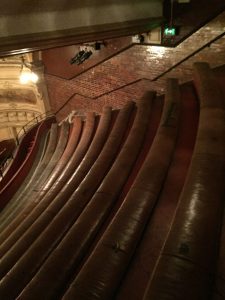 The seats in the gods were basic. The cheap seats, high up, looking down on the performance from a great and dizzying height.  Liz Conolly was a small child when she made her way along the rows at the Palace.

Mam took us to see a panto there and my memory was sitting in the Gods right at the back and it was so steep.’

And it is extremely steep, and dizzying, up in the gods. I always have the sensation that I might fall. Being in a theatre enhances all our senses and perhaps that’s why we have such vivid memories that stay with us so many years later.

Mike Stewart recalls, ‘watching a man sliding down a tight rope from the gods onto the stage.’

That must have been quite spectacular, if you were in the stalls looking up – to see the man on the rope,  the faces of those in the gods looking down. Pictures, pictures all the time. A little snippet here and there sets the atmosphere and helps us see what the writer has seen.

Carol Rodwell was 4 when she went to see Cinderella at the Palace.

I remember the sitting on a step in the aisle and looking down. In my mind I was high up. A dream.’

I can see little Carol there, her sense of wonder, feeling like she was floating above everyone else. 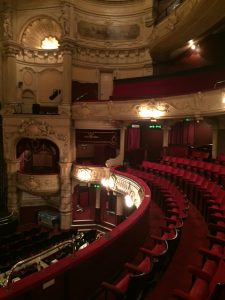 And this is rather special from Kathleen Wilson:

Every Saturday mum gave us all a shilling go with all the kids in the street to go to the Palace.  We walked over Newmarket Street bridge and all bought a carrot from a shop opposite called the kumahen shop and then bought a ticket for the gods where we saw lots of great shows. Going home across the bridge we would climb up and wait for the steam train to pass under so we could inhale the steam. Great memories.’

So few words and what huge pictures they create, don’t they? I can see Kathleen and the other kids, so vividly, running over that bridge. Buying a carrot to take to the theatre, not the extravagance and luxuries of today, no popcorn and hot dogs. But I would bet that they had the very best of times, and saw many of the true great entertainers.

Theatres are places of magic, spaces that take you away from the everyday and for two hours take you on a journey, sitting up in the darkness of the gods, peering down below. The wonder and surprise when it all ends and the lights come up again as we are jolted back into life, real life. But it takes an army of people in the shadows to make the magic work.

And if you’d like to keep up to date with news of my books, events and giveaways you can sign up for my free monthly newsletter here.