Home › Inspiration › At last! The round peg finds the round hole.

It seems such a long time since I last posted on my blog, probably because it is. The last time I wrote we were just about to move house and since then I have had to squeeze my writing into little gaps here and there. Gradually, I have been to claw back small pockets of time for myself but it has made me think how important ‘ finding space’ is to our well-being.

We were extremely lucky to sell our house to the first person that viewed it and even more lucky to complete in less than  a month. However, it has not been without stress and no matter how lucky we were to sell, moving takes its toll. So there I was madly packing, discarding, selling, or donating all the things that I no longer needed, wanted, or would not fit in my new house. It got easier as the days went by. I have never possessed  huge wardrobes full of clothes – I don’t like having that much choice – but I gave away things because I was moving on in more ways than I had ever imagined. I didn’t need many of the clothes because I was a different person to the one who once wore them. I found that it became exciting and liberating to cast those clothes aside.

Part of the reason we had to get rid of so many things was that we were not only downsizing but the house we moved to needed total renovation. Subsequently, all of our belongings were crammed into the garage and the conservatory. Our kids and their partners were great, packing, shifting, stacking and once we were moved out we decamped to my daughter and son-in-laws for a while. Although they took great care of us and made us comfortable and welcome I lacked a space for my writing. Not just physically but mentally. I didn’t seem to be able to summon the mental space to make the time to write. Our days were spent, cleaning up brick dust, stripping wallpaper and making endless cups of tea for all the tradesmen that filled the house on a daily basis.

Then came a time when I could have a desk – of sorts. A console table was requisitioned and even though it was a tad too narrow it was a start. It was MY space. 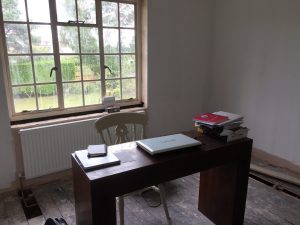 The happiness I felt was short lived. It was only a matter of days until I couldn’t get to it because all the floorboards were taken up in the corridor – so there it was – my space – so near and yet so far. 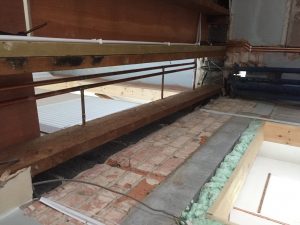 And then they decided to take away the stairs.

They were replaced the same day, albeit the other way around. Turning the stairs around has let more light into the hallway and given us greater space downstairs but for a time I felt like the very stairs of my life were being taken away. I could go neither up or down. I felt strangely adrift.

Tired and frustrated by not being able to write creatively I went into meltdown. I just wanted my desk, I wanted to spread out my papers, close the door and let the words flow.

My kids were there at the time. My son hugged and comforted me while my daughter commandeered her husband and they scrambled into the depths of the garage, pulled out my desk and set it up in the spare bedroom overlooking the garden. 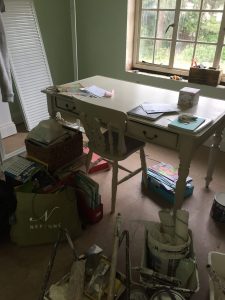 I can’t tell you the relief, the feeling of peace and calm that filled my heart that moment. I know that I can write anywhere, I have done so many, many a time but it wasn’t about that. I needed my space, that little corner of the house where I can escape into my words and really be me. Once I have it I can cope with anything. 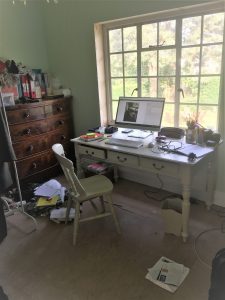 The last few weeks have been packed to the very edges of each day. I have been playing catch up, wringing scant minutes here and there in which to escape. It’s a new house and a new beginning and, even though there is still a lot of work to be done, it doesn’t matter now that I have my own space. I have renewed energy and enthusiasm. If feels so good. And I finally feel like I am, at last, a round peg in a round hole.

We all need our ‘space’. The place where we can relax and express ourselves. It might be a favourite chair or a corner of a room in which to write, sew, knit or paint; or simply the ‘space’ to feel safe to plan and daydream. I’ve found mine again. I hope you find yours.